Paolo Soleri (1919–2013) an italian architect and the former student of great american architect Frank Loyd Wright developed the idea of arcology which is a portmanteau formed of the morphemes of two root words : architecture and ecology.  The idea of arcology was to build a dwelling for a community that exercise living in most efficient setting in harmony with the natural context and environment. It was the brainchild behind many practical urban experiments and projects, Arcosanti (1970) was an experimental “arcology prototype”, its primary purpose was to demonstrate Soleri’s personal designs, his application of principles of arcology to create a pedestrian-friendly urban form.

What crystalised the idea of Arcology :

For the year-and-a-half Soleri studied under Wright, he lived in a canvas tent outside of Taliesin West with the other apprentices. Living off the land in the Sonoran desert and studying under an architect revered for his ability to integrate the natural and artificial in his architecture

The work of Pierre Teilhard de Chardin, a turn-of-the-century philosopher/geologist/Jesuit priest whose writings attempted to contextualize human evolution in the greater context of the evolution of the universe.

Out of around 4,000 acres of land bought for arcosanti, only 150 acre is inhibited . Originally designed for a community of 5000 people coexisting around nature centered in a compound hub, it is slowly growing to reach its full form with time.

This ideology of allowing nature to exist in its true form and building life around it without any excess consumption of resources rather preserving and reusing it is practised and preached in this modern urban laboratory. Currently there are other interesting programs like events, concerts, lectures, coursework, and an ongoing cottage industry making hand-cast bronze wind chimes. People can visit, participate, stay overnight.

The building surface material is concrete cast in a different approach. Concrete slab is cast on earth with six  silts that later filled with different materials or colors. This gives the exterior surface rugged texture that dissolves with the context. This technique is derived from solerie’s practice of bell and wind chime casting. The technique is called silt casting.

The buildings were oriented and formed to maximize the use of natural resources and solar energy. For example . the community gathering space known as the Arcosanti apse; the form is articulated as that of an apse ; a quarter of a spherical volume. In summer, the opening towards the south provides shade due to the sun’s higher position. The huge exterior concrete surface, heating up disseminates heat towards outside while the shaded interior remained cool. Again during the winter when the sun’s altitude is lower, the heat enters the interior without any obstacle. And during the heat dissemination from the interior walls after long hours of exposure to sun , the heat pushes away any cold wind from entering the interior space , thus keeps the space warm. This phenomena generated a micro-environment within a natural setting was where natural energy and spatial setting was used as resources. The core value of arcosanti and arcology is to integrate architecture and ecology to be conceived as a holistic system, explicable only by reference to the whole. 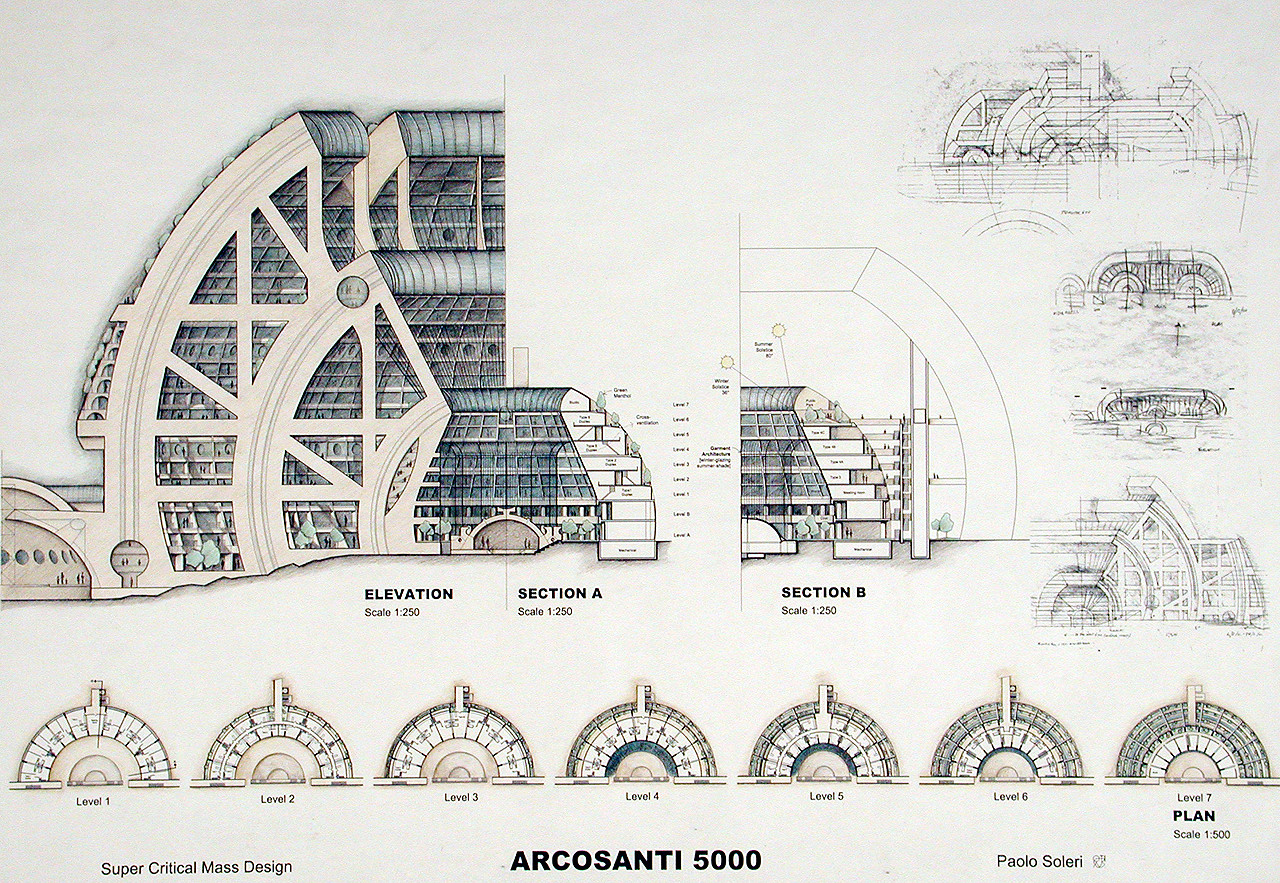 Frugality & Resourcefulness:  A careful, thoughtful approach to planning, building and daily life that is experientially rich and materially frugal

Ecological Accountability: To develop human habitat that protects its surroundings and is within Earth’s carrying capacity

Experiential Learning: The power of demonstration as a dynamic, grounded educational experience

A Limited Footprint: Urban density as opposed to unbounded dispersion allows more activities in less space and better use of limited resources providing access for all to the economic and social essentials of “city” life

Although the intention and philosophy for building better performing cities and civilization was pure , the urban habitation failed due to a few poor decisions like choosing the site in the middle of an arid land with no natural shading from landforms.

The climatic approach was followed but the architectural articulation could make the performance more efficient. All buildings faced south to maximize the use of sun but solar orientation required proper shading which was overlooked. Emphasis on simple non-mechanical devices like brisé soleil, solar alignment, and overhangs was largely absent. The buildings are facing south, with no overhangs.

Though Paolo Soleri was italian , he was not a traditionalist. As Le Corbusier could address these details and create modern forms, Soleri was more inspired from the post modern works of aldo rossi, which had focus more on pure forms of buildings thus had no loggias, no shaded walkways to protect from sun and rain. “The buildings are It’s form-driven rather than climate-inspired.” According to Mark English . 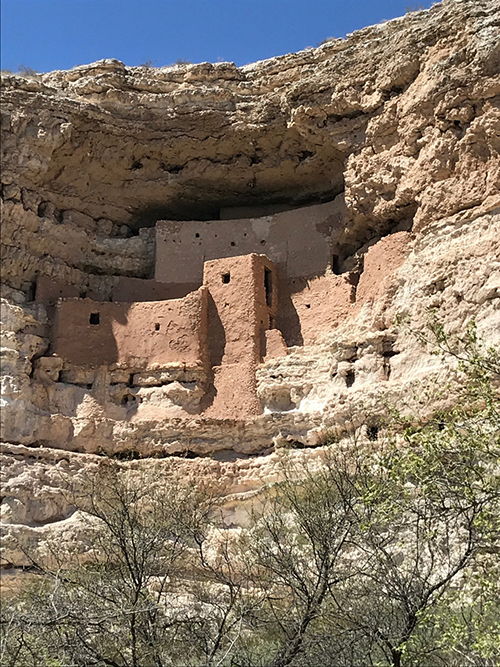 Mark compared Arcosanti with some of the historic Pueblo Indian structures that he visited in the American Southwest. “Ancient human settlements were always near a water source, so that the inhabitants could reside and grow food all in one spot. Arcosanti is near a seasonal creek that is dry for half the year with no crops grown there.”

The plantations and landscaping was non-native, which was another problem for the community  overcome and maintain. The natural ecology and biodiversity was thus disrupted. This issue could be addressed with xeriscaping, and low-water plantings given the contextual and geographical setting.

“Arcosanti is a romantically inspired vision,” Mark observed. “The Pueblo settlements are another example of humans living close to nature, with better use of existing landforms and planning. It was self-sufficient, and defensible as well.”

Arcosanti 5000 project was a visionary  step for limiting density for developed living pattern. The term “behavioral sink” originates from John B. Calhoun’s famous rat population density studies that describe behavioral pathologies stemming from overcrowding. When population density increases at an uncontrolled rate , the quality of life and infrastructure falls. Thus, limiting and controlling  the density and building with a vision of serving more than the break even value is preferred for social housing.

It’s only around 7,500 years since the first city Eirdu was formed in the southern plain of mesopotamia. Though arcosanti as an urban project is termed failure in most cases, as an urban vision, it might be the most viable way for human settlements and nature to survive in a colateral understanding. As Marc Antoine Laugier described in the essay primitive hut (1755) , we derived from nature , and our solution is also going towards it.

Vice : Arcosanti: the city of the future that time forgot.